what do we stand for anymore? do we even know? 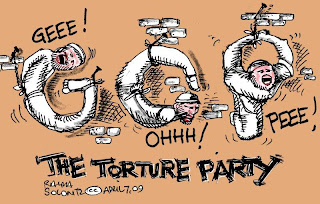 there have been innumerable assaults on the constitution- pretty much from its inception. the john adams contingent has not been pleased that 'the great unwashed' was given any say whatsoever in their own governance. those descendants we see today splashed all over fox noise, hate radio, state and local governments, tea parties, and now..... million militia marches. guess that's why they are stock piling all that ammo.

but i just don't know what to say about the torture issue. i have been a strident voice for years- pushing and pushing for people to realize that free societies take the risk of being 'less secure' in order to remain free. pushing for people to realize that we, the people, were losing the document that gave us our freedoms- legally- in america. and people were afraid. they were afraid of muslim extremists who may bomb our cities or unleash biological terror in 'the homeland.'

but the people were wrong. the terrorists lived amongst us- called themselves americans. and willfully and gleefully stripped civil liberties away at a rate unprecedented in our history. and always my question was- why? why are they doing this? when is enough money and power enough? and i didn't have a good, tangible answer. i still don't. the closest i get is simply- because they could.

because they knew going in what they wanted to do- they created 9/11 to shock america into swallowing their lines of bullshit about the country being vulnerable. they created the crisis in order to go into war mode- special presidential war powers indefinitely. they manufactured reasons to go to war with iraq and decimated and tortured people and ruined the lives of millions of people.

torture is arguably the worst thing you can do to a person. it effects them physically- and mentally- and if they survive- it effects them for the rest of their lives. and their families and neighbors and fellow countrymen- and it does not work for information. and americans authorized this- and carried it out. now, i realize that we have been doing this for years- at the very least training operatives on how to carry it out. but these folks planned to torture other folks to send a message loud and clear- that they were in charge and that's it.

over the last 8 years or so, folks like me have been called traitors, conspiracy theorists, crazy, etc.- and while it generally came from the right, much came from the left too. folks simply didn't want to believe that fellow americans could carry out what bushco and the rubber stamp legislative and judicial branches did. this couldn't happen in america- we are the land of the free. but it did.

and i guess what my purpose in writing this post is- to say simply this- the people on the right are wrong. period. they are the traitors and the unpatriotic people. i don't consider them americans at all. the people on the left who have been complicit and who have gone along with the right- in the name of power or blackmail or whatever- and didn't stand up- same thing. there is nothing patriotic about stripping civil liberties away from a democratic republic in the name of security. there is nothing noble or patriotic or brave in advocating torturing another human being. these people are cowards.

for all of the grandstanding and pretending to give a damn about the founding fathers and the constitution- and apparently, the boston tea party- these folks have not actually read the documents. they didn't listen to saint ronnie about america being an example to the world- 'a shining city' and blah, blah, blah- we were set up as the beacon of hope to the world- and we have no right to the title. so, it is time to let the people who claim to be americans know- you aren't. the rest of us are going to have to grow a set- because if we want any semblance of the country we believed in- we are going to have to fight for it. the right is arming itself- and if you pooh pooh that off- well, you may end up in a detention facility right here in the us of a.

sorry shep- we do torture- did torture- probably still do torture. the next question is- will be hold onto our principles and hold folks accountable? or perhaps the better question is- do we have any principles left?
Posted by billie at 8:50 AM

When the first reports of torture became public during the Bush administration, there wasn't this much of an outcry. Now, this news "sells" with the new Obama administration in place, so it's in the news.

As usual, the public showed concern, but took no action except for a few fringe elements at peace demonstrations and such.

It's gotten too big. The government, America. It is too much to organize and the rank and file care but stand by living their interpretation of the American dream, and let there be war, poverty, discrimination, sickness and torture.

Your title asks if we even know what we stand for. The sad part is, some people are finding out about the use of torture for the first time.

I feel the doom and gloom of "It's too late" to do anything about it all.

I've just installed iStripper, so I can have the best virtual strippers on my taskbar.