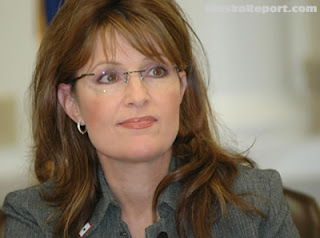 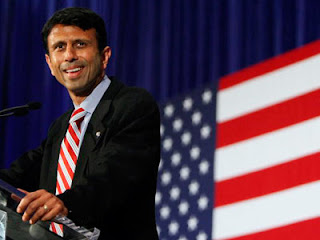 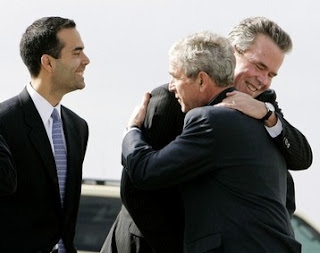 "In other words, Jindal - the alleged voice of the GOP future - had absolutely nothing new to say. And what he did say, about the stimulus, was purposefully misleading. I'm not sure how well the Obama stimulus, banking and budget plans will work. No one is. But I do know how the philosophy and the misleading politics that Jindal offered today has worked in the recent past. "

gov. palin to pay back taxes on perks

but hey, according to the rank and file, these folks are 'charismatic and good looking':

"A lot of people say that maybe he (george p.) couldn't run because of his name, I don't think that's the case," Graham said. "He's smart, he's good looking, he's charismatic. I don't see anything that would stop him. It's a great package."

kinda like mitt 'mittens' romney.
Posted by billie at 6:15 PM

If he knows how to wipe his ass, he's smarter than any Bush in American politics in the last 50 years.

What this country needs is a good exterminator.

That Palin is still in Politics sickens me. That speaks ill for our system! Palin, Jindal, Steele, they figure they will change their face but as you say it is the same old crap and it seems worse now!

The Future Was Yesterday said...

Palin does us one favor: By following her antics. we are able to keep tabs on the Evangelical freaks.

Republicans can't help themselves. It's the inbreeding and indoctrination.

The poor wretches can neither see the truth nor hear a word of reason.

They truly are a soul sucking cult of greedy, power mad, war mongering zombies and ideologues.

Holy smokes, Dave! Why don't ya tell us what ya really think about 'em. C'mon man, let it out.

Hey Tim,
I'm often inclined to answer an honest question. And sometimes I just can't keep an honest impression from slipping out.

I don't mean for a second to imply any notion that I lack love and compassion for our bewildered brethren.

Did you watch Obama's speech. Those beautifully-dressed people must have stood up, applauded and sat down 1,000 times. I thought that some of them might cark it!

But wasn't easy credit what caused the problem in the first place?

trust me- i appreciate honesty. guess that's why i am not a politician :) and i struggle with the fact that there isn't any respect or love in my heart for those kind of people. there are glimmerings of sympathy though. it's a start.

It's way more than a start, Betmo. Sympathy is compassion, empathy, and thoughtfulness, a form of love that comes from the heart, meant to be given freely. Respect, once we get past childhood, is something to be earned. e.g. Bro Tim respects Betmo. :)