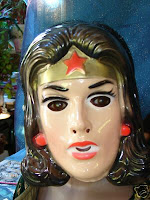 one of my first memories of trick-or-treating was with my cousin. she is the same age as i am- and we couldn't have been more than oh 6 or so. i was wonder woman. my mom bought the mask and made me an outfit out of a yellow pillowcase with the costume drawn on in permanent marker. we didn't have much money. it didn't really matter anyway because back when i was a kid- it was actually cold in october- so we had to wear coats over our costumes. i don't remember what my cousin was but i got to be wonder woman. oh- and we could eat the candy back then too- without having it x-rayed. we didn't have the nonsense of 'harvest parties' or whatever the hell the christian groups call their halloween parties. make no mistake, halloween is based on a celtic sun festival called samhain. it was the celtic new year and we took many of their traditions as our own. it was a sacred festival for the celts and they allowed one day of misrule and uninhibited behavior. it was the last gasp of summer and a time when the boundaries between the dead and living were dissolved to move freely between both worlds. the celts would place the skulls of their ancestors outside of their homes that night- and that is where the carved pumpkins come in. the other niceties i think were added in later- like cider and bobbing for apples :) what are some of your memories? i remember trying to make the candy last until christmas- when i would get more. but it never quite did. :)
Posted by billie at 10:32 AM

Hi Betmo,
As far as I know, the Celts, apart from all that dancing and singing and weaving, also collected the skulls of their friends and foes alike.
It was not unusual to eat the flesh of those defeated in battle.
The last known case of this practice was uncovered in Scotland, when a certain Seany Bean and his family were convicted of murder and cannibalism.
This was only just over 300 years ago.
Enter "Sawney Bean" into a search engine, and you will be amazed at the stories of pickled parts that were stored for the winter feasts.

Best read in daylight though.!!!